A Slow But Steady Start To FY18

After eking out a 0.1% return in July, super funds were in positive territory again in August with the median growth fund (61 to 80% growth assets) rising 0.6%. This brings the cumulative return for the first two months of the 2017/18 financial year to 0.7%.

Listed shares yielded small positive returns for the month. Australian shares were up 0.7%, while international shares were only just in the black at 0.1% on a hedged basis. However, the depreciation of the Australian dollar (down from US$0.80 to US$0.79) increased the return to 0.8% in unhedged terms. Listed property was also up, with Australian REITs and global REITs advancing 1.5% and 0.3%, respectively.

Chant West director, Warren Chant says: "The modest start to the financial year was to be expected. The 10.8% return achieved in the year to June was something of a surprise, and it would be even more of a surprise if that is matched or beaten this year. While the economic outlook is much better than it was a year ago, both listed and unlisted assets have had a great run and most asset sectors are now fully valued or close to it.

"In August, macroeconomic data in the US was generally positive, including GDP growth for the June quarter being revised upwards from 2.6% to 3%. However, escalating tension between the US and North Korea weighed on investor sentiment, as did Hurricane Harvey which caused such damage in Texas and neighbouring states.

"The economic data coming out of Europe remained positive. There will be much interest in the European Central Bank's meeting later this week where it's expected to provide some details of how it will be tapering its stimulus measures.

"In the Asia Pacific, the Chinese economy continues to show signs of improvement which is good news for Australia given our strong trade links. Back home, the RBA again kept interest rates on hold at 1.5% earlier this month, citing the continuing improvement in global economy.

Table 1 compares the median performance for each fund category in Chant West's Multi-Manager Survey, ranging from All Growth to Conservative. Over one, three, five and seven and fifteen years, all risk categories have met their typical long-term return objectives, which range from CPI + 2% for Conservative funds to CPI + 5% for All Growth. However, the GFC continues to weigh down the ten year returns with only the Conservative category meeting its objective over this period.

Source: Chant West
Note: The CPI figures for July and August 2017 are estimates. 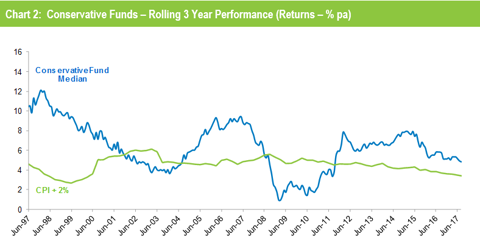 Source: Chant West
Note: The CPI figures for July and August 2017 are estimates.

Industry funds and retail funds in line in August

Industry funds and retail funds performed in line with each other in August, returning 0.6%. However, industry funds continue to hold the advantage over the medium and longer term, ahead by between 0.7% and 1.3% per annum, as shown in  Table 2.