Another Positive Month For Super As COVID Bounce Back Continues

Super funds have continued their remarkable COVID bounce back, with the median growth fund (61 to 80% in growth assets) up 0.9% in February. Since the recovery began at the end of March last year there has only been one negative monthly result, and that was just a slight retreat in September. The cumulative return from end-March 2020 to mid-March 2021 now stands at just under 20%.

Chant West Senior Investment Research Manager, Mano Mohankumar says listed share markets, which are the main drivers of growth fund performance, had a healthy February despite developing some wobbles towards the end of the month. "While there's great optimism around the rollout of vaccines and a return to some economic normality, there were some fears that a stronger than expected economic recovery may result in increased inflation and fast-tracked tightening of monetary policy. That caused investors to drive up bond yields in late February and that in turn had the effect of pulling back share markets. However, over the full month Australian shares were still up 1.5%. International shares advanced 2.7% in hedged terms but the appreciation of the Australian dollar reduced that gain to 1.6% in unhedged terms. Reflecting the rising yields, Australian and international bonds were down 3.6% and 1.6%, respectively, over the month.

"Share markets have risen in the first half of March and, as a result, we estimate that the median growth fund is up a further 2.3% so far this month. That brings the return since the end of March last year to nearly 20%, which is remarkable given the health concerns and economic damage caused by COVID-19. It also means that we're more than 5% above the pre-COVID crisis high that was reached at the end of January 2020.

"In the US, February saw improved vaccine rollouts and falling numbers of new COVID-19 cases. The company earnings reporting season for the December quarter was also better than expected.

"The UK is also progressing well with its vaccine rollout. In the Euro zone, however, the pace of vaccinations has been slower than hoped and several countries have experienced increases in new COVID-19 cases in recent weeks. In Italy, one of the countries hardest hit by the pandemic, parliament signed off on the formation of a new government led by Mario Draghi, former head of the European Central Bank.

"Back at home, all states continue to have COVID case numbers under control with all domestic borders now open. In recent days, we've even seen news of Australia and Singapore planning a travel bubble with vaccinations, of course, playing a key role. There was more positive news in February with the company reporting season being better than expected. Many more companies beat analysts' earnings expectations than missed them."

It's difficult to make direct comparisons of the performance of these age-based options with the traditional options that are based on a single risk category, and for that reason we report them separately. Table 2 shows the median performance for each of the retail age cohorts, together with their current median allocation to growth assets. It also includes a row for traditional MySuper Growth options for comparison – nearly all of which are not-for-profit funds. Care should be taken when comparing the performance of the retail lifecycle cohorts with the median MySuper Growth option, however, as they're managed differently so their level of risk varies over time.

As a result of the strong recovery since April 2020, the options that have higher allocations to growth assets have now done better over all periods shown. Younger members of retail lifecycle products – those born in the 1970s, 1980s and 1990s – have outperformed the MySuper Growth median over most periods shown. However, they've done so by taking on more share market risk.

The older cohorts (those born in the 1960s or earlier) are relatively less exposed to growth assets so you'd expect them to underperform the MySuper Growth median over longer periods. Capital preservation is more important at those ages so, while they miss out on the full benefit in rising markets, older members in retail lifecycle options are better protected in the event of a market downturn.

MySuper products have only been operating for seven years, so when considering performance it's important to remember that super is a much longer-term proposition. Since the introduction of compulsory super in 1992, the median growth fund has returned 8.1% p.a. The annual CPI increase over the same period is 2.4%, giving a real return of 5.7% p.a. – well above the typical 3.5% target. Even looking at the past 20 years, which now includes three share major market downturns – the 'tech wreck' in 2001–2003, the GFC in 2007–2009 and now COVID-19 – the median growth fund has returned 6.6% p.a., which is still well ahead of the typical return objective. 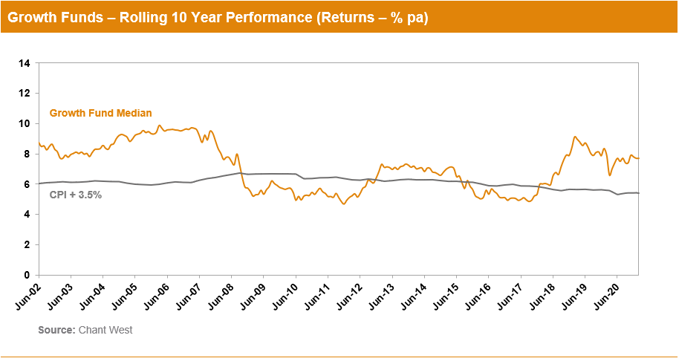 Note: The CPI figure for January and February 2021 are estimates.


International share market returns in this media release are sourced from MSCI. This data is the property of MSCI. No use or distribution without written consent. Data provided "as is" without any warranties. MSCI assumes no liability for or in connection with the data. Product is not sponsored, endorsed, sold or promoted by MSCI. Please see complete MSCI disclaimer.