Daring To Dream Of A Double Digit Return For 2017

A surge in October has left super funds in sight of a double digit return for the 2017 calendar year. Following a steady September quarter, strong share markets drove returns higher in October with the median growth fund (61 to 80% growth assets) gaining 2.3% for the month. This brings the return over the first ten months of the year to a very healthy 8.6%.

In October, Australian shares surged 4%. International shares gained 2.5% on a hedged basis but an even better 4.3% in unhedged terms as a result of the depreciation of the Australian dollar (down from US$0.78 to US$0.77). Listed property was also up, with Australian and global REITs advancing 2.2% and 0.2%, respectively.

Chant West director, Warren Chant says: "With less than six weeks of 2017 remaining, it's almost certain that growth super funds will finish in the black for the sixth consecutive year. With the year to date return sitting at 8.6%, a double digit return for the year is a distinct possibility. That would be the best result since 2013, when growth funds delivered a staggering 17.2%.

"Looking back, not many people would have predicted such a strong result. It was around this time last year that Donald Trump claimed a shock victory in the US election and markets braced for what was to come. Yet despite the uncertainty that came with that result, global share markets have taken it in their stride. Investors have focused on the improving economic data and markets have surged, with Wall Street and some other world markets reaching new all-time highs.

"US economic data in October was generally positive, with better than expected GDP growth over the September quarter of 3% annualised. The Eurozone's economy continued to show signs of recovery, with unemployment back below 9% – the lowest rate since January 2009. The European Central Bank also provided a positive assessment of the outlook for the region, announcing that quantitative easing would be extended to September 2018 but that the pace would be pared back. In the UK, Brexit negotiations continue to dominate news with both the political and economic outlook remaining unclear.

"In the Asia Pacific, the Chinese economy continues to show signs of improvement which is good news for Australia given our strong trade links. Back home, the RBA has again kept interest rates on hold at 1.5%, citing the continuing improvement in the global economy."

Table 1 compares the median performance for each fund category in Chant West's Multi-Manager Survey, ranging from All Growth to Conservative. Over one, three, five, seven and fifteen years, all risk categories have met their typical long-term return objectives, which range from CPI + 2% for Conservative funds to CPI + 5% for All Growth. However, the GFC continues to weigh down the ten year returns with only the Conservative category meeting its objective over this period. 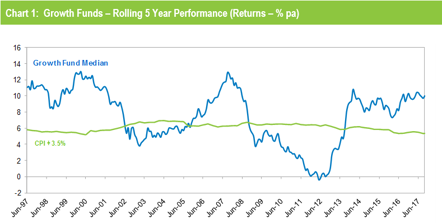 Source: Chant West
Note: The CPI figure for October 2017 is an estimate. 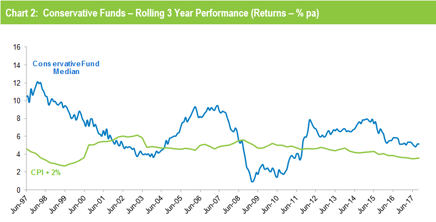 Source: Chant West
Note: The CPI figure for October 2017 is an estimate.

Retail funds led the way in October, posting a return of 2.6% against 2.2% for industry funds. However, industry funds continue to hold the advantage over the medium and longer term, ahead by between 0.8% and 1.5% per annum, as shown in Table 2.