Eighth Positive Year, And Over 100% Gain Since GFC

Super funds are poised to deliver a positive return for the eighth consecutive financial year, capping off a remarkable 110% rebound since the end of the Global Financial Crisis. With just two business days remaining, early estimates suggest that the median growth fund will post a very healthy return of 10.5% for 2016/17, while some of the better-performing funds may deliver as much as 12.5%. Growth funds are those that have 61 to 80% of their investments in growth assets, and they are the ones in which the majority of Australian workers are invested.

Chant West director, Warren Chant, says: "Against all the odds, Australia's major super funds will post a double digit return for the 2017 financial year and complete an unbroken eight years of positive performance.  That's an impressive result, especially since we've been through an extended period of economic and political uncertainty.  We're not out of the woods yet, but the economic indicators are looking better now than they were this time last year.

"While the immediate focus will be on the financial year performance, it's always important to look at returns in a longer-term context.  Super fund members have enjoyed a terrific run.  The last negative financial year most people experienced was back in 2008/09.  Since the GFC low point, the median growth fund has delivered a cumulative return of over 110%, or an average of nearly 9.5% per annum.  That's over 7% above the rate of inflation over the period, so it's comfortably ahead of the typical longer-term return objective for these funds which is to beat inflation by between 3% and 4% annually.

"As always happens, some funds have performed better than others over this shortish period.  This year's top funds look likely to report returns as high as 12.5%, while even the bottom end of the range is likely to be a respectable 7.5%.  The better performing funds will be those that had higher allocations to listed shares and to unlisted assets generally.  It will also have helped to have a lower exposure to listed property, bonds and cash.

"Looking at the two major industry segments, we expect industry funds to finish the year ahead of retail funds by about 0.7%.  This may be a surprise given that industry funds generally have lower allocations to listed shares, which have been the strongest performing sectors over the year.  However, this was more than offset by the fact that they also have much lower allocations to bonds and little exposure to listed property, which have been the weakest sectors along with cash.  They also have a meaningful proportion of their defensive allocation in unlisted property and infrastructure, which have performed well, while retail funds' defensive exposures are mainly in cash and bonds."

The table below shows the estimated median performance and ranges for each category in Chant West's Multi-Manager Survey, ranging from All Growth to Conservative.

The chart below shows the median growth fund performance for each financial year since the start of compulsory super in July 1992.  Of those 25 years, 22 were positive and 3 were negative, 2 of those being 2007/08 and 2008/09 in the depths of the GFC. 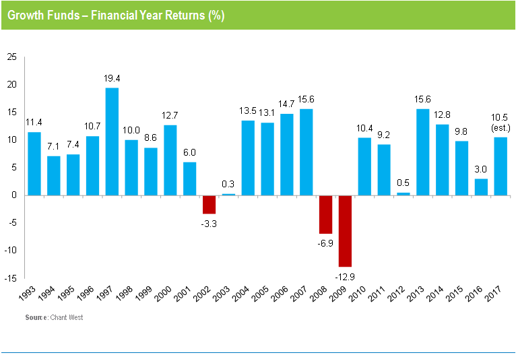 Note: Performance is shown net of investment fees and tax. It does not include administration fees or adviser commissions.

The keys to strong performance in FY17

Chant says: "The typical growth fund has on average 53% allocated to listed Australian and international shares (excluding REITs), so the performance of those sectors has the greatest influence on overall returns.  With only two days of the financial year remaining, Australian shares are up 14.3%.  International shares have performed even better, with a return of 20% in hedged terms and 16.6% unhedged.  So it would certainly have helped your performance to have a sizeable exposure to listed share markets.

"It's been a different story for listed property, however.  Australian REITs were the strongest performing sector a year ago but have been the worst performing sector this year, falling 3%.  Meanwhile, global REITs, although in positive territory, returned just 3.3%.

"Unlisted assets aren't valued continually, so it will be a little while before we can see exactly how well they have performed.  But we expect returns for unlisted infrastructure, unlisted property and private equity to be in the double digits or very close to that, once the June quarter revaluations are factored in.

"Growth funds do of course include some defensive assets in their investment mix – somewhere between 20% and 40% – so how funds approach that allocation has a bearing on their performance.  Over the past year, the traditional defensive assets of bonds and cash have done poorly.  Australian and global bonds returned 0.8% and 1%, respectively, while cash returned just 1.8%.  So, as mentioned earlier, those funds (mainly industry funds) that had lower allocations to these asset sectors would have benefited."

Improved outlook but funds will struggle to find value

Chant says: "Back in July last year, we said that the lower return / higher volatility environment was likely to continue for some time and that the 'Brexit' vote in the UK had only added to the list of concerns.  In November, there was a further shock with Donald Trump prevailing in the US election.  Trump's election has added to the political uncertainty but investment markets have reacted optimistically, focusing more on the improving global economy.

"We have also seen the US Federal Reserve lift its effective interest rate three times (all in the past six months) from a range 0.25% to 0.50% to a range of 1% to 1.25%.  The most recent hike earlier this month represents the latest vote of confidence in a slow-growing but durable economy.  The Fed foresees one further rise this calendar year, which is in line with its previous forecast.

"In Europe, we've seen improving macroeconomic data but the uncertainty around the implications of last year's Brexit vote remains.  However, the recent French and Dutch election results have alleviated some fears about stability in the region.

"Closer to home, the Chinese economy has shown signs of improvement over the past six months or so, but it still remains to be seen whether President Trump's protectionist policies will ever make their way into law, which could be damaging given China's importance as a global trading partner.

"Domestically, Australia's Reserve Bank cut the official interest rate to an all-time low of 1.5% in August last year in a bid to boost the sluggish economy.  However, we have seen no further easing since then, with the RBA citing an improving global economy for keeping rates on hold.

"The economic and market outlook is looking much better than it did this time last year, but given the great run investment markets have had, many asset sectors are now fully valued or close to it.  So it may be a challenge for funds to identify undervalued assets that will deliver real returns in line with their investment objectives.  That challenge will only be made harder by the pressure they're under to reduce investment fees which, in some cases, may inhibit their appetite for seeking out new sources of active returns."