Super funds have kept up their strong start to 2019, with the median growth fund (61 to 80% in growth assets) gaining 2.7% in February on the back of the ongoing rally in share markets. Following on from the 2.5% gain in January, February’s result has brought the return over the first eight months of the financial year to 2.6%.

Australian shares surged 6% in February. International shares also rose by a healthy 3.3% in hedged terms but, with the depreciation of the Australian dollar over the month (down from US$0.73 to US$0.71), that gain was boosted to 5.6% in unhedged terms. Listed property was also up, with Australian and international REITs advancing 1.8% and 0.3%, respectively.

Chant West senior investment research manager Mano Mohankumar says: “Share markets have rebounded strongly over the first two months of 2019 with Australian shares and hedged international shares both up more than 10%. This has been the main factor driving growth fund performance which is up 5.2% over the same period, more than offsetting the losses suffered in the December 2018 quarter.

“World share markets have traded in a V-shaped pattern over the past few months and that holds some lessons for super fund members. No-one wants to see the value of their savings fall, but when you see an abrupt sell-off followed by an equally sharp gain it should act as a reminder not to react to short-term volatility. The worst thing to do after the December quarter falls would have been to switch into a more conservative option with a lower exposure to shares. Not only would you have locked in the losses, but you would also have missed out on the January and February rebound. As always, the message is to choose an appropriate option and stick with it.

“The share market rebound has been driven partly by optimism that the trade dispute between the US and China is closer to resolution, with the US suspending its plan to increase tariffs on Chinese goods. In the UK, meanwhile, the Brexit puzzle is still a long way from being solved but at least there are signs that a hurried exit from the EU may have been averted.

“While the early results for 2019 have been positive, we would caution members not to get carried away. The concerns about China-US trade relations, Brexit and the pace of global economic growth may have lessened but they have not gone away. Additionally, most asset sectors are still fully valued or close to it, so there are no easy sources of return for asset managers.”

Mohankumar says, “While our Growth category is still where most people have their super, a meaningful number are now in so-called ‘lifecycle’ products. Most retail funds have adopted a lifecycle design for their MySuper defaults, where members are allocated to an age-based option that is progressively de-risked as that cohort gets older.

“It’s difficult to make direct comparisons of the performance of these age-based options with the traditional options that are based on a single risk category, and for that reason we report them separately. Table 2 shows the median performance for each of the retail age cohorts, together with their current median allocation to growth assets.”

While lifecycle is the most common MySuper default in the retail sector, most not-for-profit funds still use their traditional growth options for that default role. A few have gone down the lifecycle path, however, and while the general premise is the same the way it is implemented is different. Rather than allocating members to age-based cohorts as retail funds do, in the not-for-profit lifecycle model members typically ‘switch’ from one traditional risk category to another at particular ages. The diversified options that underlie these strategies are included in Table 1.

Aside from 2018, we have seen strong performance from growth assets in recent years so, as you would expect, the options that have higher allocations to growth assets have generally done best. Younger members of retail lifecycle products – those born in the 1970s, 1980s and 1990s – have held their own compared with the median MySuper Growth fund, but have done so by taking on more share market risk.

The older age cohorts (those born in the 1960s or earlier) are less exposed to share market risk. Capital preservation is more important at those ages so, while they miss out on the full benefit in rising markets, older members in retail lifecycle options should be better protected in the event of a market downturn. Indeed, we saw that theory work well in practice over the December 2018 quarter.

MySuper products have been operating for less than five years, so when considering performance it is important to remember that super is a much longer-term proposition. The Chart below compares the performance since July 1992 – the start of compulsory superannuation – of the traditional Growth category median with the typical return objective for that category (CPI plus 3.5% per annum after investment fees and tax over rolling five-year periods). Notwithstanding the sharp downturn at the end of 2018, the healthy returns in recent years have seen the longer-term performance tracking well above that CPI plus 3.5% target for the past five years. 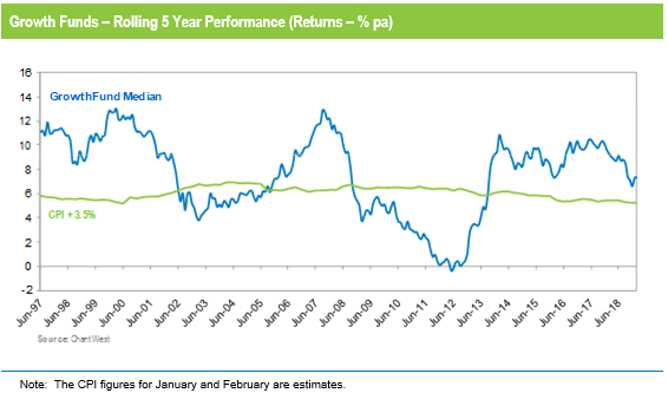