Super bounces back in March, with a positive year still in sight

After suffering losses in January and February, super funds bounced back into positive territory in March on the strength of resilient share markets. The median growth fund (61 to 80% in growth assets) was up 1.1% for the month, trimming the decline over the quarter to 2%. So the possibility of a positive 2021/22 result is still very much alive, with the median return sitting at 2.3% over the first nine months of the financial year.

Chant West Senior Investment Research Manager, Mano Mohankumar, says the positive outcome in March came despite the serious concerns that continue to weigh on investment markets – notably the Russia-Ukraine war and the threat of rising inflation and interest rates. “The geopolitical and economic implications of the war are still a major unknown. So far, it has resulted in an energy and commodity price shock that has amplified the surge in inflation. So central banks around the world are faced with a dilemma; either increase the pace of interest rate hikes to combat inflation or hold back on the tightening in an effort to support economic growth. So far, it appears they view inflation as the more pressing issue and in March we saw the US Federal Reserve increase its target rate by 0.25%, with further increases expected through 2022. That pattern is likely to continue in the US and elsewhere unless the outlook for economic growth worsens significantly.

“Against this uncertain background, share markets showed great resilience in March. In particular, the Australian share market has continued its relative outperformance, buoyed by its high weighting to resource companies which have benefited significantly from rising commodity prices. Financials were also key contributors to the strong performance with large gains from the major banks. Over the month, Australian shares surged 6.9%. While international shares didn’t fare as well, they were still up a healthy 3% in hedged terms. However, the sharp appreciation of the Australian dollar over the period (up from US$0.73 to US$0.75 and from €0.64 to €0.68), turned that gain into a small loss of 0.9% in unhedged terms. Bonds continued to suffer as yields rise, with Australian and international bonds losing 3.7% and 2.1%, respectively, over the month.

“Clearly, we’re in a very turbulent period and strong investment returns are going to be hard to find. Super fund members need to be reminded that they can’t expect a continuation of the returns we’ve seen over the past decade, when the median growth fund delivered 8.5% per annum. That’s not sustainable and it’s not what these funds are designed to achieve. The typical long-term return objective for growth funds is to beat inflation by 3.5% per annum. That translates to about 5.5% to 6% per annum in absolute terms, which is far more realistic in the current climate.

“Members also need to maintain a long-term focus. That’s the key to ensure you don’t get distracted by short-term noise and make knee-jerk decisions which will hurt your long-term investment prospects. As an example, if you switched from a growth fund to cash or a more conservative option during February, you would have crystallised losses and missed out on the subsequent rebound in March. Attempting to time the market almost invariably results in worse longer-term outcomes than if you sit tight and ride out the ups and downs.”

Table 1 compares the median performance for each of the traditional diversified risk categories in Chant West’s Multi-Manager Survey, ranging from All Growth to Conservative. All risk categories have generally met their typical long-term return objectives, which range from CPI + 2% for Conservative funds to CPI + 4.25% for All Growth.

Lifecycle products behaving as expected
Mohankumar says that while the Growth category is still where most people have their super invested, a meaningful number are now in so-called ‘lifecycle’ products. “Most retail funds have adopted a lifecycle design for their MySuper defaults where members are allocated to an age-based option that’s progressively de-risked as that cohort gets older,” he said.

Despite the share market falls in January and February, options that have higher allocations to growth assets have done better over most periods shown. Younger members of retail lifecycle products – those born in the 1970s, 1980s and 1990s – have generally either outperformed or performed in line with the MySuper Growth median over periods longer than three months. However, they’ve done so by taking on significantly more share market risk. On average, these younger cohorts have at least 20% more invested in listed shares and listed real assets than the typical MySuper Growth option.

Long-term performance remains above target
MySuper products have only been operating for eight years, so when considering performance it’s important to remember that super is a much longer-term proposition. Since the introduction of compulsory super in 1992, the median growth fund has returned 8.1% p.a. The annual CPI increase over the same period is 2.5%, giving a real return of 5.6% p.a. – well above the typical 3.5% target. Even looking at the past 20 years, which now includes three major share market downturns – the ‘tech wreck’ in 2002–2003, the GFC in 2007–2009 and COVID-19 in 2020 – the median growth fund has returned 7.1% p.a, which is still well ahead of the typical return objective. 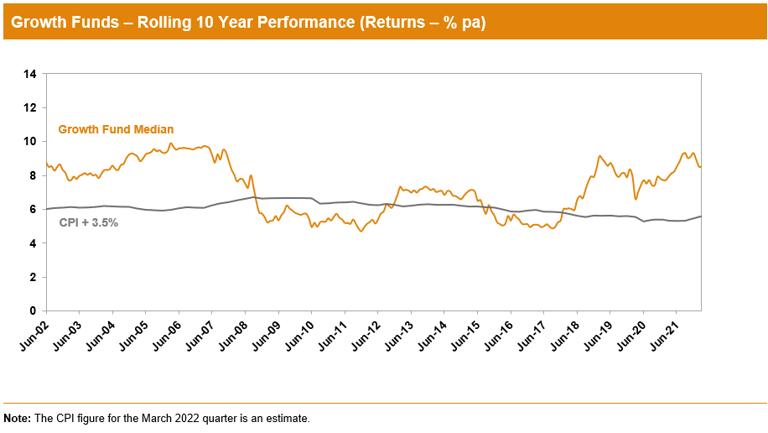 International share market returns in this media release are sourced from MSCI. This data is the   property of MSCI. No use or distribution without written consent. Data provided “as is” without any warranties. MSCI assumes no liability for or in connection with the data. Product is not sponsored, endorsed, sold or promoted by MSCI. Please see complete MSCI disclaimer.

UniSuper has been named Super Fund of the Year at the tenth annual Chant West Super Fund Awards last night in Sydney. More than 250 guests from across the industry embraced the opportunity to celebrate in-person, watching on as TelstraSuper took out the other major award, Pension Fund of the Year.

Super funds slip in April, near break-even for financial year

Super funds took a step backwards in April, with the median growth fund (61 to 80% in growth assets) down 1.2% for the month. That reversed a similar gain in March and pulled the median return over first ten months of the 2021/22 financial year back to 1.2%. With share markets down so far in May we estimate that, with only about six weeks remaining, the financial year return is near break-even, at -0.5%.

Chant West today announced the finalists for the 2022 Chant West Super Fund of the Year award. The country’s best super and pension funds will be recognised at the 10th annual Super Fund Awards on 25 May, recognising excellence and showcasing industry best practice across 13 award categories