Super funds are poised to deliver a positive return for a record-breaking 10th consecutive financial year. With just two business days remaining, Chant West's early estimate is that the median growth fund will post a return of 7.1% for 2018/19. Growth funds are those that have 61 to 80% of their investments in growth assets, and they are the ones in which the majority of Australian workers are invested.

Chant West senior investment research manager Mano Mohankumar says: "Fund members should be very pleased with a return in the order of 7.1%. That's more than 5.5% above the current rate of inflation – well above the typical long-term objective which is to beat inflation by 3.5%.

"So funds are growing their members’ savings well above the increase in the cost of living, and they've been doing that for a long time. While this year's result hasn't reached the heights of some recent years, the average return over the past 10 financial years (including this one) has been close to 9% per annum. That's a tremendous run, but we should remember that it really represents the recovery from the setback of the GFC, so it would be a mistake to assume it's sustainable. Indeed, with many asset sectors looking to be fully valued or close to it, we're expecting some challenging times ahead.

"The 2018/19 financial year has been a tale of two halves. Over the six months to December growth funds lost 2.4% but, since then, they've surged nearly 10% – largely on the back of strong share markets. However, we caution members not to get carried away because the global economic backdrop is still dogged by uncertainties. Trade tensions remain between the US and China, with new tariffs being imposed or threatened. The UK is in the process of transitioning to a new Prime Minister, adding to the uncertainty over Brexit, and all the while concerns around the pace of global economic growth continue to linger.

"This year’s median return of 7.1% is a terrific result in the circumstances and, as always, some individual funds will have done better and some worse. This year's top funds in our Growth category may report a return as high as 10%, which is about 8.5% above the inflation rate. Even funds at the bottom end of the range are likely to deliver respectable positive returns.

"The majority of Australians are still invested in traditional growth funds, but the trend towards lifecycle strategies (mainly retail funds) – where your investments vary according to your age – means that some people (generally those born in the 1970s or later) have higher allocations to growth assets than the typical growth fund (85% plus versus about 72% on average) and they would have fared slightly better than the 7.1% growth fund median over the year. On the other hand older members in lifecycle strategies would have much less invested in growth assets, so they can expect to see returns lower than the 7.1% growth fund median.”

The table below shows the estimated median performance and ranges for each traditional diversified fund category in Chant West's Multi-Manager Survey, ranging from All Growth to Conservative.

The chart below shows the median growth fund performance for each financial year since the start of compulsory super in July 1992. Of those 27 years, 24 were positive and only three were negative, two of those being consecutive in 2007/08 and 2008/09 in the depths of the GFC.

Given that growth funds typically expect a negative result once in every five years, on average, to have only three in 27 years means they have easily achieved their risk objective as well as their return objective. 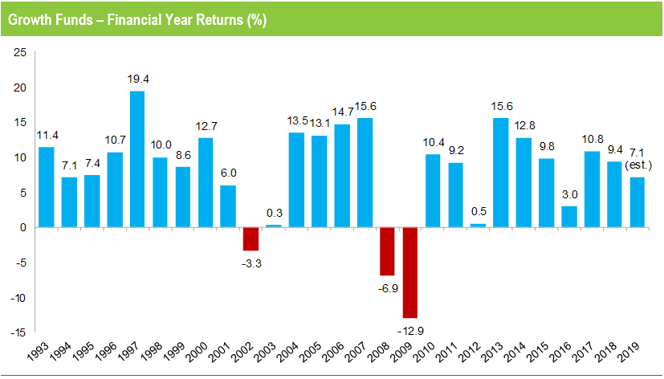 The keys to strong performance in FY19

Mohankumar says: "Growth funds benefitted from the fact that all the underlying asset sectors they invest in were in positive territory over the year. The typical fund has on average 53% allocated to listed Australian and international shares, so the performance of those sectors has the greatest influence on overall returns. With only two days remaining, Australian shares are up a solid 11.5% over the financial year. International shares are up 5.6% in hedged terms, but the depreciation of the Australian dollar over the year has increased that to an impressive 11.5% in unhedged terms. That’s important because, on average, growth funds have about 70% of their international shares exposure unhedged.

"While listed shares contributed a lot to performance, listed property also had a good year. In fact, Australian REITs have been the standout asset sector, surging 21.6%.

"Unlisted assets also delivered respectable returns, although not as high as in some recent years. These assets aren't valued continuously, so it will be a little while before we can see exactly how well they have performed. But we expect returns for unlisted property to be between 5% and 8% once the June quarter revaluations are factored in. Returns from unlisted infrastructure and private equity will likely range between about 8% and 11%.

"In the defensive asset sectors bonds have had an excellent year, with Australian bonds up 9.8% and global bonds gaining 7.1%. With interest rates at an all-time low, it's not surprising that cash was the worst performing sector with a return of just 2%."