Having delivered a better than expected result of -0.6% for the challenging 2019/20 financial year, super funds got off to a bright start to the new financial year with the median growth fund (61 to 80% in growth assets) up 1% in July.

Chant West senior investment research manager Mano Mohankumar says: “Super funds got off to a good start to FY2021, but there are some major hurdles ahead. For a start, we still have no idea how long and deep the current global recession will be. Share markets have risen, but that is partly due to unprecedented support from central banks worldwide which have been pouring liquidity into the system. Having said that, we have started to see signs of the share market rally wavering in some regions, and we expect volatility to continue. Super fund members should take comfort, however, from their experience last financial year. It provided a valuable reminder that they are invested in well-diversified portfolios spread across a wide range of asset sectors, and that diversification works to cushion the impact during periods of share market weakness. At the same time, growth funds have a sizeable allocation to listed shares – about 54% on average – so they are able to capture a lot of the upside when markets are performing well.

“The healthy return in July was largely on the back of international shares which advanced 4% in hedged terms – mainly driven by the US market. However, the appreciation of the Australian dollar limited that gain to 1.1% unhedged terms. Australian shares were also up, returning 0.6% for the month. Global bonds had a strong month, returning 1%, while domestic bonds delivered a more modest 0.4%.

“Despite US economic data confirming the severity of the downturn, a strong wave of new COVID-19 infections and ongoing trade tensions between the US and China, the US share market powered ahead. This was mainly driven by strong earnings announcements from major technology companies such as Amazon, Apple and Facebook, which saw the tech-centric NASDAQ index reach a record high. In the UK and eurozone, however, share markets retreated due to fears around the economic impact of a second wave of COVID-19 cases.

“Back at home, much of the attention has been on Victoria’s second wave of infections, while the situation in NSW also remains on a knife’s edge. In a difficult time for Australians, there is continued support from the Federal government with the JobKeeper and JobSeeker programs extended to help the economy get back on a path to recovery. Similarly, the government has extended the application period for the second tranche of early release of super to the end of the year. We saw funds navigate through the first tranche of payments quite well, and they will be even better prepared this time around.”

Table 1 compares the median performance for each of the traditional diversified risk categories in Chant West’s Multi-Manager Survey, ranging from All Growth to Conservative. Over 3, 5, 7, 10 and 15 years, all risk categories have met their typical long-term return objectives, which range from CPI + 2% for Conservative funds to CPI + 4.75% for All Growth.

Mohankumar says, “While our Growth category is still where most people have their super invested, a meaningful number are now in so-called ‘lifecycle’ products. Most retail funds have adopted a lifecycle design for their MySuper defaults, where members are allocated to an age-based option that is progressively de-risked as that cohort gets older.”

Despite positive returns from April through to July, the sharp setback in February and March has resulted in those options that have higher allocations to growth assets generally faring worse over the past year. Over longer periods those higher-risk options, which cover the younger cohorts born in the 1960s or later, have generally performed better. However, despite taking on more share market risk, these younger cohorts haven’t performed as well as the median MySuper Growth option over five years and since the introduction of MySuper.

The reason these younger cohorts in retail lifecycle funds have underperformed the MySuper Growth option over those longer periods is that, while they are generally well-diversified, these funds don’t have the same level of diversification as many of the not-for-profit funds. This is mainly due to the not-for-profit funds’ higher allocations to unlisted assets (unlisted property, unlisted infrastructure and private equity) – about 21% on average. This compares with the retail lifecycle fund average of 5% for these younger cohorts, although there are a few that have 10-14% unlisted asset allocations. These assets have been proven to add value over the long term, not just for their diversification qualities but also because they generate an illiquidity premium in their returns relative to listed markets. We should note that short-term performance comparisons are somewhat complicated by the fact that some funds have devalued their unlisted assets more aggressively than others over the course of the COVID crisis.

The older cohorts (those born in the 1950s or earlier) are relatively less exposed to growth-orientated assets so you would expect them to underperform the MySuper Growth median over longer periods. Capital preservation is more important at those ages so, while they miss out on the full benefit in rising markets, older members in retail lifecycle options are better protected in the event of a market downturn.

MySuper products have only been operating for six and a half years, so when considering performance it is important to remember that super is a much longer-term proposition. Since the introduction of compulsory super in 1992, the median growth fund has returned 7.9% per annum. The annual CPI increase over the same period is 2.3%, giving a real return of 5.6% per annum – well above the typical 3.5% target. Even looking at the past 20 years, which now includes three share major market downturns – the ‘tech wreck’ in 2001–2003, the GFC in 2007–2009 and now COVID-19 – the median growth fund has returned 6.3% per annum, which is ahead of the typical return objective.

For most of the compulsory super era, funds typically set their return objectives over rolling five-year periods. However, over recent years we’ve seen more and more funds move to re-set their objectives over rolling ten-year periods, which is more consistent with a longer-term focus. We believe it is appropriate for us now to use rolling ten-year performance data when we plot the performance of the median fund versus the typical return objective. The chart below shows that, for the majority of the time, the median growth fund has exceeded its return objective. The exceptions are two periods between mid-2008 and late-2017, when it fell behind. This is because of the devastating impact of the 16-month GFC period (end-October 2007 to end-February 2009) during which growth funds lost about 26% on average. That impact persists far longer in a rolling 10-year chart than it does in our previous rolling 5-year chart. 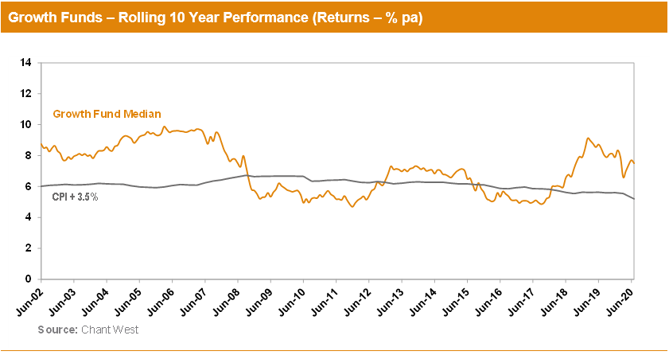 Note: The CPI figure for July 2020 is an estimate.