Super Funds Power On Towards The FY17 Finish Line

With just two weeks of the financial year remaining, super funds are on track to post a remarkably strong annual performance. The median growth fund (61 to 80% growth assets) gained another 0.5% in May, taking the return over the eleven months of the financial year to 10.4%. And with a positive start to June, a double digit return is looking increasingly possible.

Listed shares, which are the main drivers of growth fund performance, produced mixed results in May.  Australian shares fell 2.7% over the month.  However, international shares were up 1.6% on a hedged basis and were even higher at 2.8% in unhedged terms due to the depreciation of the Australian dollar (down from US$0.75 to US$0.74).  Listed property was mixed, with Australian REITs down 1% and global REITs up 0.5%.

Chant West director, Warren Chant says: "With less than two weeks of the financial year remaining, we estimate that the median return for growth funds is sitting at just under 11%. So it's certain that they'll finish the year in the black for the eighth consecutive time – and quite possibly in the double digits.

"This year's performance comes on the back of a seven year run in which growth funds returned an average of 8.8% per annum. This year looks like increasing that average. Funds are performing well above the rate of inflation and well ahead of their own inflation-adjusted targets. That's really impressive, especially since we've been through a long period of uncertainty, both economic and political. We're not out of the woods yet, but the economic indicators are certainly looking better now than they were a year ago.

"In May, the US share market was up on the back of improving macroeconomic data. That included the March quarter growth in GDP which was revised upwards to 1.2%, well above the initial estimate of 0.7%. In Europe, too, economic data remained positive. The French election result also helped to alleviate some fears about political stability in the region, with Emmanuel Macron easily prevailing over his rival, the anti-immigration and anti-EU Marine Le Pen.

"In the Asia Pacific, China's share market rose despite softer economic data and a credit rating downgrade from Moody's. The Chinese economy has shown signs of improvement over the past six months or so, but it still remains to be seen whether US President Trump's protectionist policies will ever make their way into law, which could be damaging given China's importance as a global trading partner. Back in Australia, the RBA kept interest rates on hold at 1.5% earlier this month, citing the improvement in the global economy."

Table 1 compares the median performance for each fund category in Chant West's Multi-Manager Survey, ranging from All Growth to Conservative. Over one, three, five and seven years, all risk categories have met their typical long-term return objectives, which range from CPI + 2% for Conservative funds to CPI + 5% for All Growth. However, the GFC continues to weigh down the ten year returns with only the Conservative category meeting its objective over this period. Over 15 years, only the All Growth category fell short of its objective having been hardest hit during the GFC.

Source: Chant West
Note: Performance is shown net of investment fees and tax. It is before administration fees and advisor commissions.

Chart 1 compares the performance since July 1992 – the start of compulsory superannuation – of the Growth category median with the typical return objective for that category (CPI plus 3.5% per annum after investment fees and tax over rolling five year periods).  The healthy returns in recent years, and with the GFC period now out of the calculation, have seen the five year performance tracking well above that CPI plus 3.5% target. 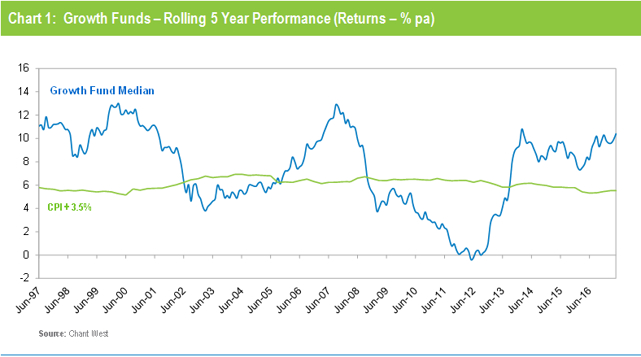 Note: The CPI figures for April and May 2017 are estimates.

Chart 2 compares the performance of the lower risk Conservative category (21 to 40% growth assets) median with its typical objective of CPI plus 2% per annum over rolling three year periods.  It shows that, now that the GFC years have faded into history, Conservative funds have also returned to exceeding their performance objectives. 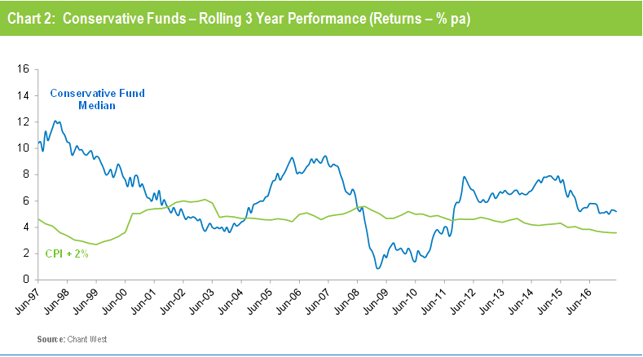 Note: The CPI figures for April and May 2017 are estimates.