After delivering a return of 3.6% for the challenging 2020 calendar year – an excellent outcome under the most testing of circumstances – super funds have maintained the positive momentum into 2021. The median growth fund (61 to 80% in growth assets) was up 0.2% in January, and February is looking very positive so far.

Listed share markets, which are the main drivers of growth fund performance, were relatively flat in January. Australian shares were up 0.3% while international shares returned -0.2% and 0.1% in hedged and unhedged terms, respectively.

Chant West Senior Investment Research Manager, Mano Mohankumar says the remarkable turnaround since the end of March last year continues. "While the January return of 0.2% represents a small uplift, share markets have picked up speed in February and we estimate that the median growth fund is up a further 2.5% so far this month. That brings the return since the end of March last year to over 18%. That's remarkable, considering the health and economic damage wrought by COVID-19.

"In January, emerging markets outperformed developed markets despite a sell-off late in the month on concerns around a resurgence in COVID-19 cases. The US share market experienced increased volatility as a result of highly unusual and targeted trading by a segment of retail investors. This overshadowed the underlying investor optimism brought about by President Biden's proposed stimulus plan.

"In the UK, the COVID-19 vaccine roll-out gained momentum but the ongoing lockdown continued to hurt economic activity. In the Euro zone, the roll-out of vaccines has been slower than hoped. The region also experienced some political instability with the resignation of Italian Prime Minister, Giuseppe Conte, who has been replaced by former European Central Bank Chief, Mario Draghi.

"Back at home, all states now have COVID case numbers largely under control – although occasional mini outbreaks, such as we've seen in Victoria in recent days, must still be expected. Earlier this month the RBA left the official cash rate unchanged at 0.10%. That, together with a 'better than expected' start to the half-year reporting season, an uplift in employment numbers and positive commentary from the Reserve Bank, has underpinned a general improvement in corporate and consumer confidence."

It's difficult to make direct comparisons of the performance of these age-based options with the traditional options that are based on a single risk category, and for that reason we report them separately. Table 2 shows the median performance for each of the retail age cohorts, together with their current median allocation to growth assets. It also includes a row for traditional MySuper Growth options for comparison – nearly all of which are not-for-profit funds. Care should be taken when comparing the performance of the retail lifecycle cohorts with the median MySuper Growth option, however, as they're managed differently so their level of risk varies over time.

As a result of the strong recovery since April, the options that have higher allocations to growth assets have now generally done better over all periods shown. Younger members of retail lifecycle products – those born in the 1970s, 1980s and 1990s – have outperformed the MySuper Growth median over the short term and have generally held their own over the medium and longer terms. However, they've done so by taking on more share market risk.

The older cohorts (those born in the 1950s or earlier) are relatively less exposed to growth assets so you'd expect them to underperform the MySuper Growth median over longer periods. Capital preservation is more important at those ages so, while they miss out on the full benefit in rising markets, older members in retail lifecycle options are better protected in the event of a market downturn.

MySuper products have only been operating for seven years, so when considering performance, it is important to remember that super is a much longer-term proposition. Since the introduction of compulsory super in 1992, the median growth fund has returned 8% p.a. The annual CPI increase over the same period is 2.4%, giving a real return of 5.6% p.a. – well above the typical 3.5% target. Even looking at the past 20 years, which now includes three share major market downturns – the 'tech wreck' in 2001–2003, the GFC in 2007–2009 and now COVID-19 – the median growth fund has returned 6.5% p.a., which is still well ahead of the typical return objective. 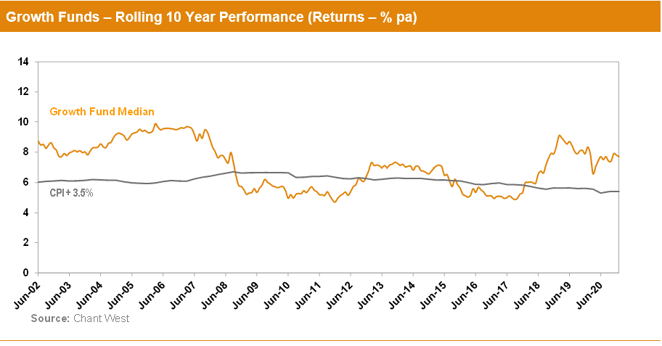 Note: The CPI figure for January 2021 is an estimate.