After a strong 2017, super funds initially got off to a good start in 2018, with the median growth fund (61 to 80% in growth assets) returning 0.8% in January. This brought the return over the seven months of the financial year to date to a healthy 6.7%. Early February has seen a change of fortunes, however, and sliding share markets have led the median growth fund about 1.1% lower so far this month.

In January, share market returns were mixed. Australian shares were down 0.4% but hedged international shares rose 3.9%, although the appreciation of the Australian dollar trimmed that to 1.8% in unhedged terms. Listed property was down with Australian and global REITs retreating 3.2% and 1.3%, respectively.

Chant West senior investment research manager, Mano Mohankumar says: "While January was a solid month for super funds, we've seen falls in domestic and global share markets in February so far. These falls don't come as a shock as asset managers have been saying for some time that investment markets were fully valued or close to it.

"It's at times like this that the benefits of diversification come to the fore. Growth fund performance isn't driven by listed share and property markets alone. On average, they invest about 55% in those markets so that leaves 45% spread across a wide range of other areas, including unlisted assets such as unlisted infrastructure and property as well as traditional defensive sectors like bonds and cash. This helps cushion the blow when there are sharp market falls like we've seen in February. So while Australian shares and hedged international shares are down 1.9% and 3.4% respectively in February so far, we estimate that the median growth fund is only down 1.1%.

"People nearing retirement are naturally more likely to be concerned about seeing their balances go down than people in their 20s or 30s. However, they're also typically more conservatively invested. We estimate that conservative funds (21 to 40% in growth assets) are only down 0.5% over February to date.

"We encourage members to check that the investment option they're in is suitable for them and, if so, to remain patient, think long-term and not get distracted by short-term volatility. Trying to time the market by moving into a more conservative option can be detrimental because not only do you crystallise your losses, but you also risk missing out on the subsequent rebound when markets recover."

Table 1 compares the median performance for each fund category in Chant West's Multi-Manager Survey, ranging from All Growth to Conservative. Over one, three, five, seven and fifteen years, all risk categories have met their typical long-term return objectives, which range from CPI + 2% for Conservative funds to CPI + 5% for All Growth. Even the ten year returns, which have been weighed down longest by the GFC effect, have improved to the point where only the All Growth and High Growth categories are short of their return objectives. 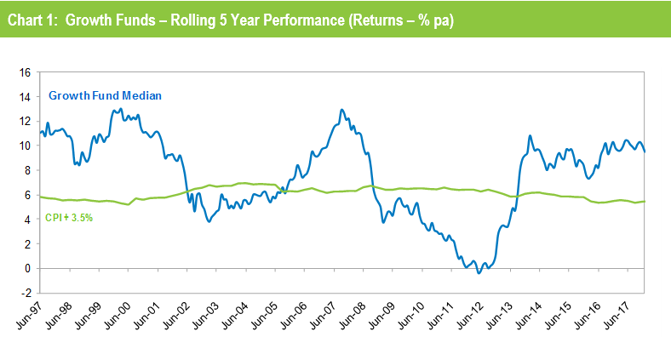 Source: Chant West
Note: The CPI figure for January 2018 is an estimate.

Source: Chant West
Note: The CPI figure for January 2018 is an estimate.

Industry funds ahead of retail funds in January

Industry funds outperformed retail funds in January, posting a return of 0.9% versus 0.7% for retail funds. Industry funds also continue to hold the advantage over the medium and longer term, ahead by between 0.5% and 1.6% per annum, as shown in Table 2.