Surprise! 2017 Shaping As A Vintage Year

Australia's major super funds look certain to deliver a sixth consecutive positive calendar year return – and quite possibly in the double digits. A gain of 1.3% in November has pushed the median growth fund (61 to 80% growth assets) to a cumulative return of 10% for the first 11 months of 2017, so a positive December would make for a vintage year.

Australian shares rose 1.7% in November. International shares gained 1.6% on a hedged basis but an even better 3.2% in unhedged terms as the Australian dollar fell from US$0.77 to US$0.76. Listed property was also up, with Australian and global REITs advancing 5.3% and 2.4%, respectively.

Chant West Chairman, Warren Chant says: “With only a handful of trading days left in 2017, it appears certain that growth funds will finish in the black for the sixth consecutive year. The year to date return is sitting on 10% and December has been positive so far, so a double-digit result is in sight. That would be the best year since 2013, when we saw a remarkable 17.2% return.

"This is a surprisingly good result and it's been driven by strong share markets, particularly overseas. We've been saying for some time that all asset sectors appear to be close to or fully valued. Add to that the uncertainty generated by the Trump election just over a year ago and you'd never have predicted such a strong performance. It just shows how investors have shut out the 'noise' and concentrated on the facts, which show a steadily improving global economy.

"As expected, the US Federal Reserve raised its benchmark interest rate by 25 basis points last week. That was the third rise this year, and it has also projected three rises in 2018 and again in 2019. While the low rate stimulus is slowly unwinding, the US is close to finalising landmark tax reforms that would provide a boost to the economy and to corporate earnings.

"The Eurozone, too, is continuing its economic recovery with job creation at its fastest pace in 17 years. However, November also gave rise to some political uncertainty with the collapse of talks to form a new coalition government in Germany. In the UK, meanwhile, some progress has been made in the Brexit negotiations which should help to clarify the longer-term economic ramifications."

"In the Asia Pacific, the Chinese economy continues to improve which is good news for Australia given our strong trade links. Back home, employment data has been surprisingly strong and, with official interest rates still on hold at 1.5%, there are encouraging signs of an improving domestic economy."

Table 1 compares the median performance for each fund category in Chant West's Multi-Manager Survey, ranging from All Growth to Conservative. Over one, three, five, seven and fifteen years, all risk categories have met their typical long-term return objectives, which range from CPI + 2% for Conservative funds to CPI + 5% for All Growth. However, the GFC continues to weigh down the ten year returns with only the Conservative category meeting its objective over this period. 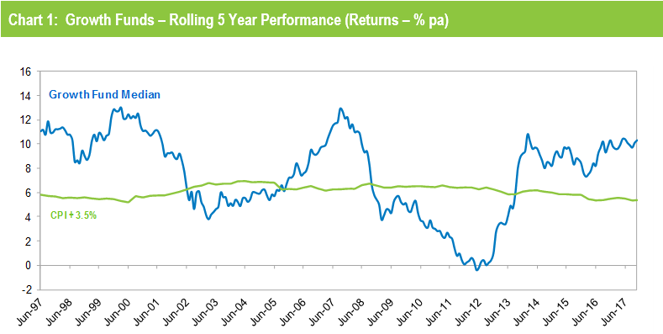 Source: Chant West
Note: The CPI figures for October and November 2017 are estimates. 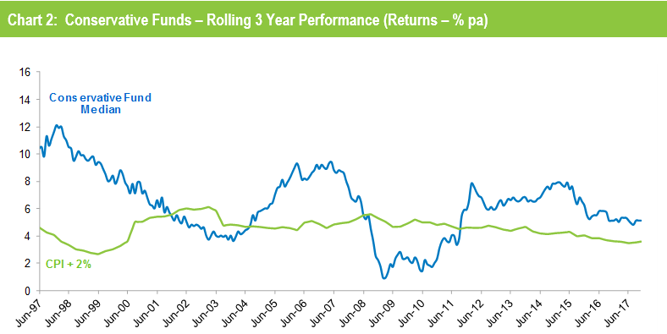 Source: Chant West
Note: The CPI figures for October and November 2017 are estimates.

Retail funds ahead again in November

Retail funds edged out industry funds in November, posting a return of 1.3% versus 1.2% for industry funds. However, industry funds continue to hold the advantage over the medium and longer term, ahead by between 0.7% and 1.3% per annum, as shown in Table 2.