Ukraine turmoil takes its toll as funds slip in February

Increasingly turbulent investment markets took their toll on super fund performance in February, with the median growth fund (61 to 80% in growth assets) slipping 1.1% over the month. Despite the losses in January and now February, the median return over the first eight months of the financial year remains positive at 1.4%.

Chant West Senior Investment Research Manager, Mano Mohankumar, says that concerns around Russia’s invasion of Ukraine dominated market sentiment in February. “Markets reacted nervously but once again, however, we saw the benefits of diversification at play. With the average growth fund having about 55% allocated to listed share markets, they remain the main drivers of performance. The conflict in Ukraine resulted in international shares falling 2.8% in hedged terms in February, and the appreciation of the Australian dollar over the month increased the loss to -5.5% in unhedged terms. However, Australian shares were actually up 2.1% for the month. That, along with the fact that growth funds have about 45% allocated to a wide range of assets other than listed shares, helped limit the overall loss to 1.1% for the month.

“Investors are trying to gauge the potential fallout from the invasion, both in geopolitical terms and the likely economic effect flowing from the sanctions imposed on Russia. Much is still uncertain, but the most obvious impact so far has been higher energy prices which could result in more persistent inflation. However, it remains to be seen whether central banks around the world will increase the rate of interest rate hikes to combat inflation or, with slower growth predicted as a result of the crisis, whether they will hold back on tightening in an effort to support the economy.

“One of the questions on the minds of many fund members would be ‘what is my super fund’s investment exposure to Russia?’ They’ll be reassured to hear that the amount is so small as to be immaterial. We recently surveyed eight of Australia’s largest super funds and their allocation to Russian investments ranged between zero and 0.1%, and they’re looking to continue lowering that remaining exposure as markets permit.

“At times like this it’s particularly important for people to remember that super is a long-term game and in the case of a lot of members, their money is likely to remain in the super system long after they retire, so they can afford to remain patient given their long investment horizon. We caution against attempting to time the market during periods of share market volatility, as it almost invariably results in worse longer-term outcomes than if you sit tight and ride out the ups and downs. By switching to cash or a lower risk option after a period of share market weakness, you crystallise your losses and potentially miss out on some or all of the subsequent rebound. We saw that happen when people panicked early in the COVID crisis, and it’s an important lesson to keep in mind now.”

Table 1 compares the median performance for each of the traditional diversified risk categories in Chant West’s Multi-Manager Survey, ranging from All Growth to Conservative. All risk categories have generally met their typical long-term return objectives, which range from CPI + 2% for Conservative funds to CPI + 4.25% for All Growth.

Mohankumar says that while the Growth category is still where most people have their super invested, a meaningful number are now in so-called ‘lifecycle’ products. “Most retail funds have adopted a lifecycle design for their MySuper defaults where members are allocated to an age-based option that’s progressively de-risked as that cohort gets older,” he said.

Despite the share market falls in January and February, options that have higher allocations to growth assets have done better over most periods shown. Younger members of retail lifecycle products – those born in the 1970s, 1980s and 1990s – have generally either outperformed or performed in line with the MySuper Growth median over the one-year period and longer. However, they’ve done so by taking on significantly more share market risk. On average, these younger cohorts have at least 20% more invested in listed shares and listed real assets than the typical MySuper Growth option.

MySuper products have only been operating for eight years, so when considering performance it’s important to remember that super is a much longer-term proposition. Since the introduction of compulsory super in 1992, the median growth fund has returned 8.1% p.a. The annual CPI increase over the same period is 2.4%, giving a real return of 5.7% p.a. – well above the typical 3.5% target. Even looking at the past 20 years, which now includes three major share market downturns – the ‘tech wreck’ in 2002–2003, the GFC in 2007–2009 and COVID-19 in 2020 – the median growth fund has returned 7% p.a, which is still well ahead of the typical return objective. 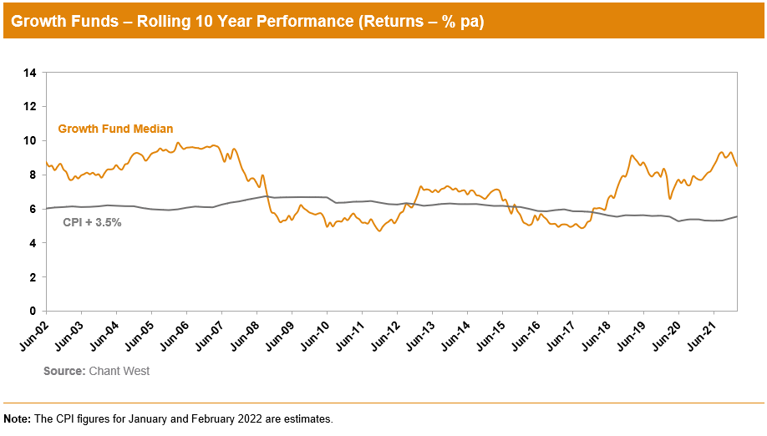